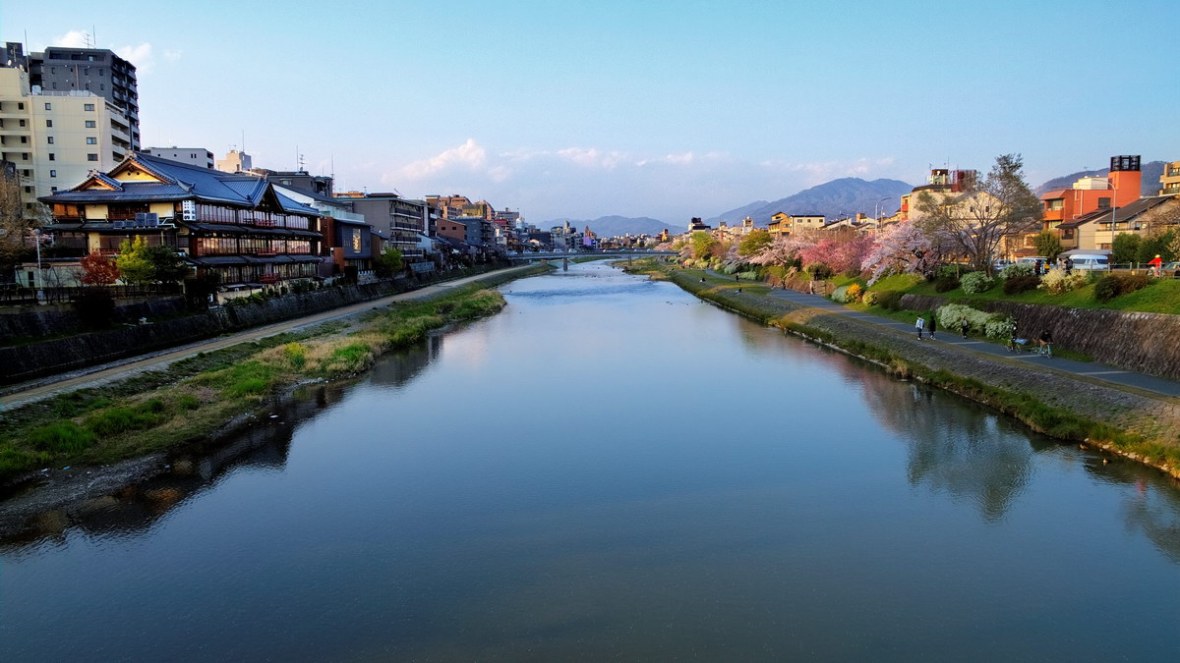 A River Runs Through It. No, this isn’t the American period film of 1992 by Robert Redford but it could be a title of a movie about Kyoto. The river that bisects the eastern and western old capital of Japan is the Kamogawa, a revered landmark of the city that has been part of its history and culture for more than a millennia. Continuing the American connection, where New York has its Central Park, Kyoto has the Kamogawa, a peaceful oasis of wide open spaces at the center of the city that is at once a river, a wildlife attraction, a park, a playground, a stroller’s, jogger’s and biker’s delight, and a meditative space, and a seasonal top attraction.

You may think that the river took its name after one of its denizens–the wild ducks, which is “kamo” in Nihongo. You would be right but it’s not as straightforward as that. Kamogawa was named after its geographical origins, which in turn took its name from the Kamo clan, an ancient clan that made the region their home. And where did the clan take its name after? Why, after the wild duck, of course. As for its other half, “gawa” means river, which means calling it the Kamogawa River is a redundancy, which you will encounter a lot in Japanese names for places and terms. 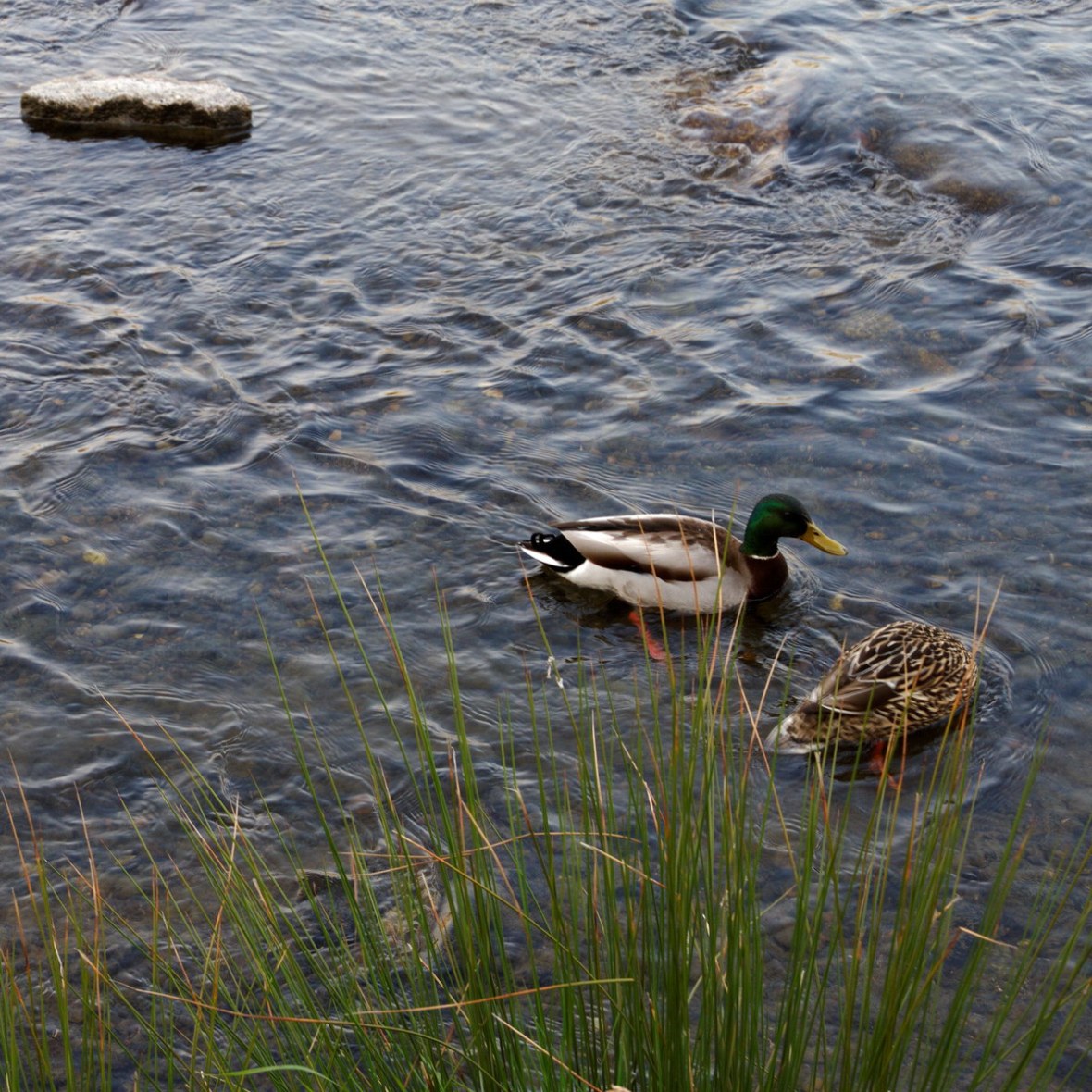 A pair of Mallard ducks at the edge of the riverbank. 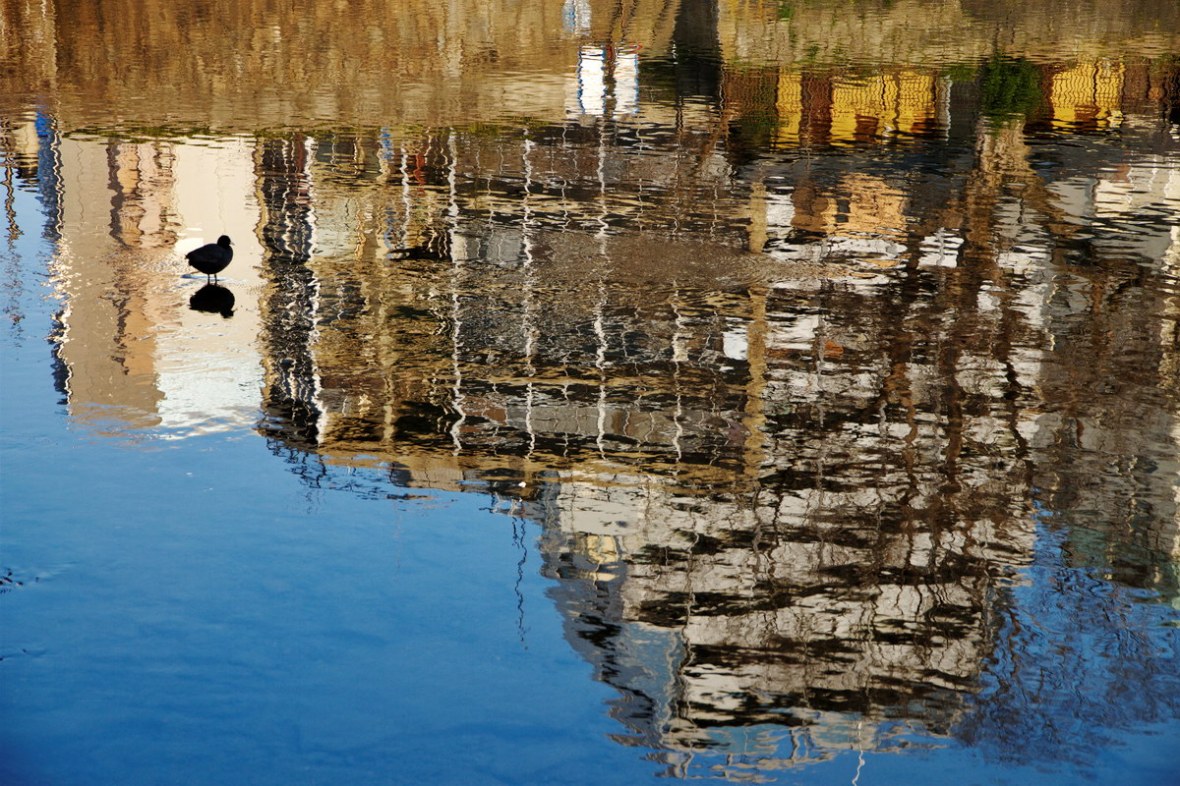 The Kamogawa flows southward from Mt. Sajikigataka in the north from where it originates and joins the Takano river at the Kamogawa Delta and then runs in a straight channel downward (said to be deliberately diverted east of the Imperial Palace for good fung shui when the capital was being laid out during the start of the Heian period) before bending left and heading southwest where it eventually merges with the Katsura River; it then joins the river system of the Yodo River, which flows out onto Osaka Bay.

The Kamogawa is not a place to visit in a rush and walking the length of it–all 4.4 or so kilometers–from the Kamo-ohashi bridge at the tip of the Kamogawa delta all the way south to Shichijo-ohashi bridge near Kyoto station can be daunting, but commensurately rewarding. It’s really not so much a place to see as it is a place to experience. 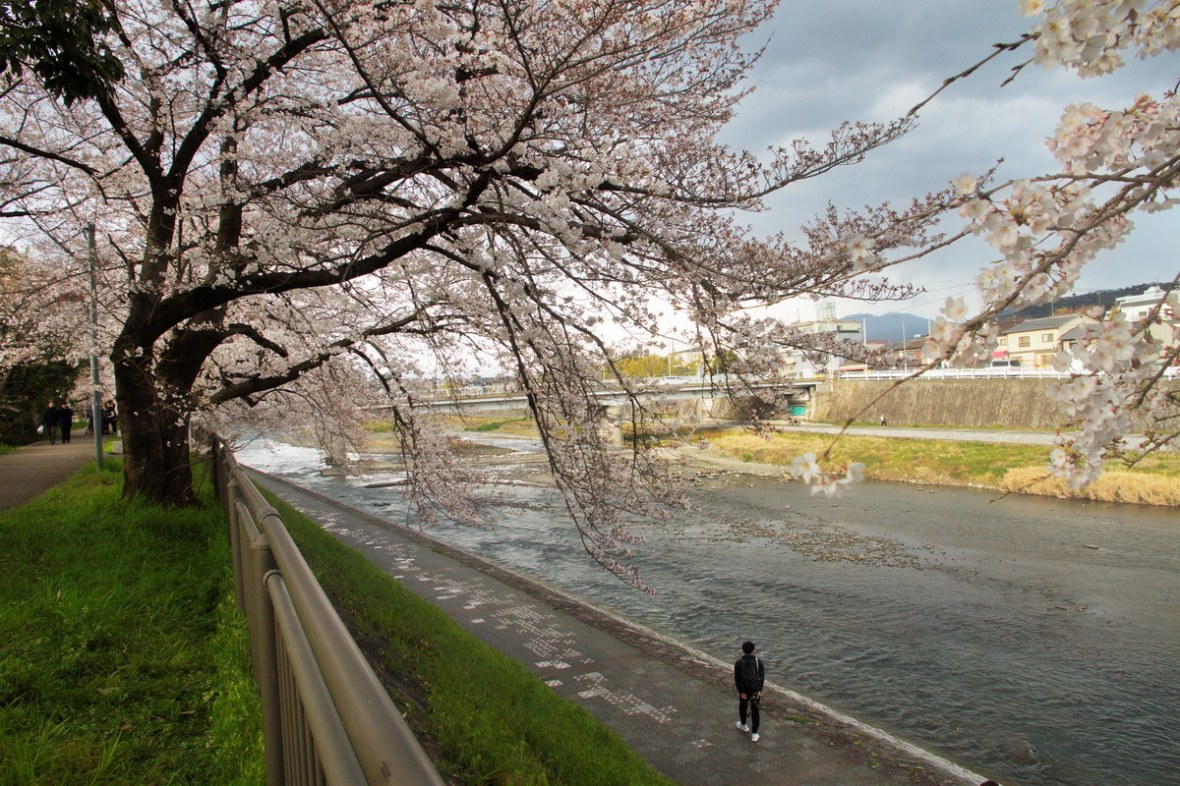 I think it’s best enjoyed in bite sizes so that even a 15-minute stroll is enough to stoke your appetite to see more during your next visit. And there’s certainly a lot to see and photograph! I’ve walked only half the length in total in one go because when I have a camera with me, the trip along either side of the riverbank can stretch twice as long and become twice as enjoyable. The river may not be meandering, but I find myself meandering along as I slow down my strides and my thoughts, letting my mood take me wherever it pleases. It’s a fickle mistress, our moods are, but in this special place, I have allowed it free rein to play with me in a game of pleasure and discovery. And looking at the wide, sweeping view of the river and the trees, the mountains beyond, the gold, the blue, the green, the orange, the magenta and the baby pink rejuvenates me. I feel grateful.

Here are some of the many ways to enjoy a trip to this centrally-located attraction:

It’s a River
It may seem very long but it’s only the 4th longest river of Kyoto; however, its exact length seems to depend upon which source you read–some say it’s 33 kilometers or 31 kilometers long or even as short as 23 kilometers in length. It’s not deep, maybe three feet at most. It’s dry in many places but during typhoon season, the floodwaters can rise and overflow its banks, as has happened as recently as last year. That’s a lot of water! There are many fascinating views along its eastern and western banks from sunrise to sunset, and well into the night. 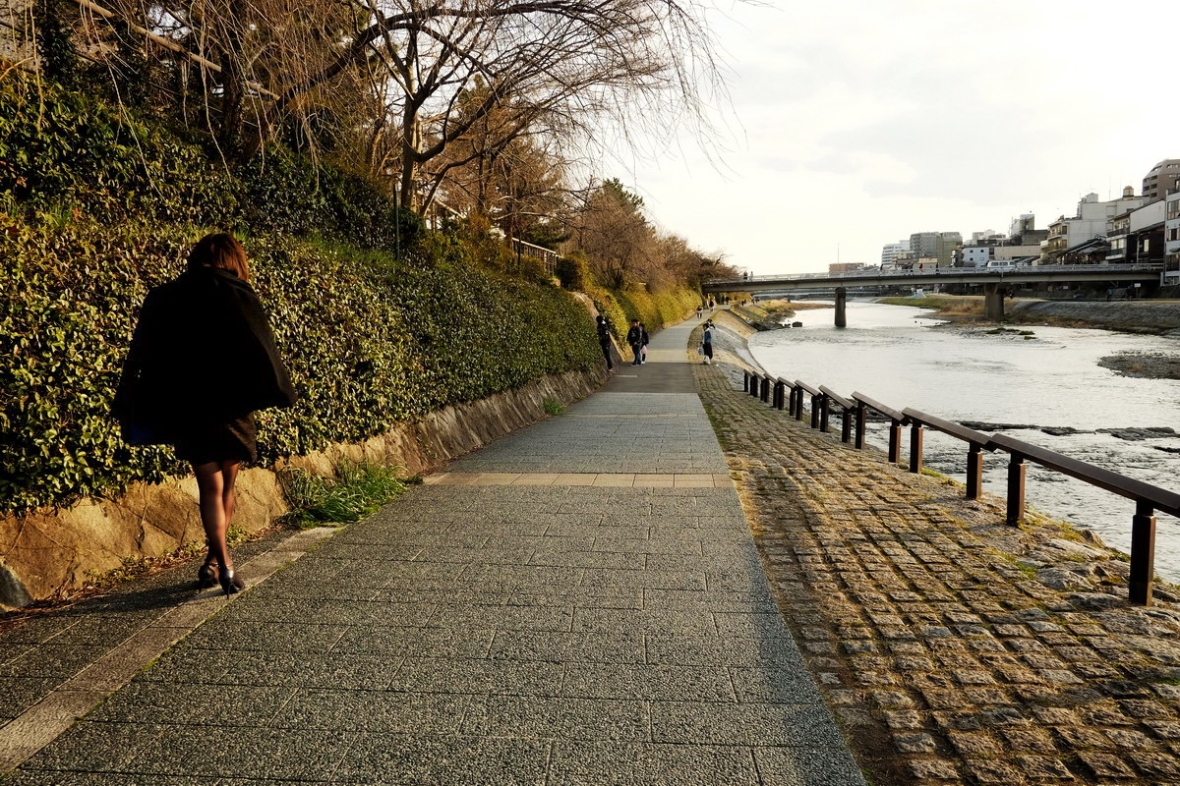 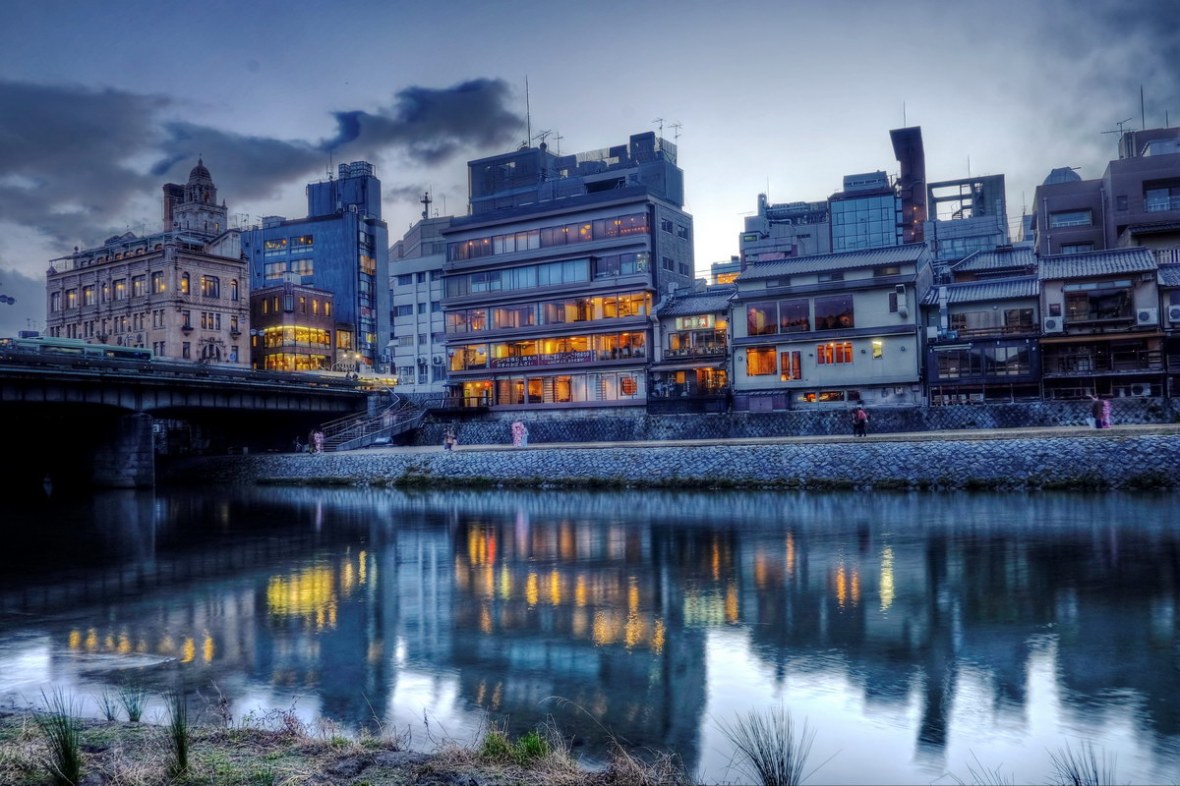 Blue hour near the Shijo-ohashi bridge.

It’s Home to Many Wildlife
There are the wild ducks, of course–Spot-billed ducks, Eurasian/American Wigeons, and Mandarins and Mallards. Then there are the other birds like the raptors, which seem to be a fixture in the skies above the city especially above the picnic areas along the riverbank, ready to swoop down to grab the food of an unsuspecting picknicker; the Grey Herons, the Large-Billed and Carrion crows, the Great and Little Egrets, the pigeons, the Pied Wagtails, White-cheeked Starlings, the Great Cormorant, the Black-headed Gull, etc. Also in its waters can be found the elusive Japanese catfish and even more elusive rodent, nutria, the latter of which we spotted for a second or two before it disappeared into the bushes below. Having this many wildlife so close and nearby is another reason I love Kyoto and the Kamo. 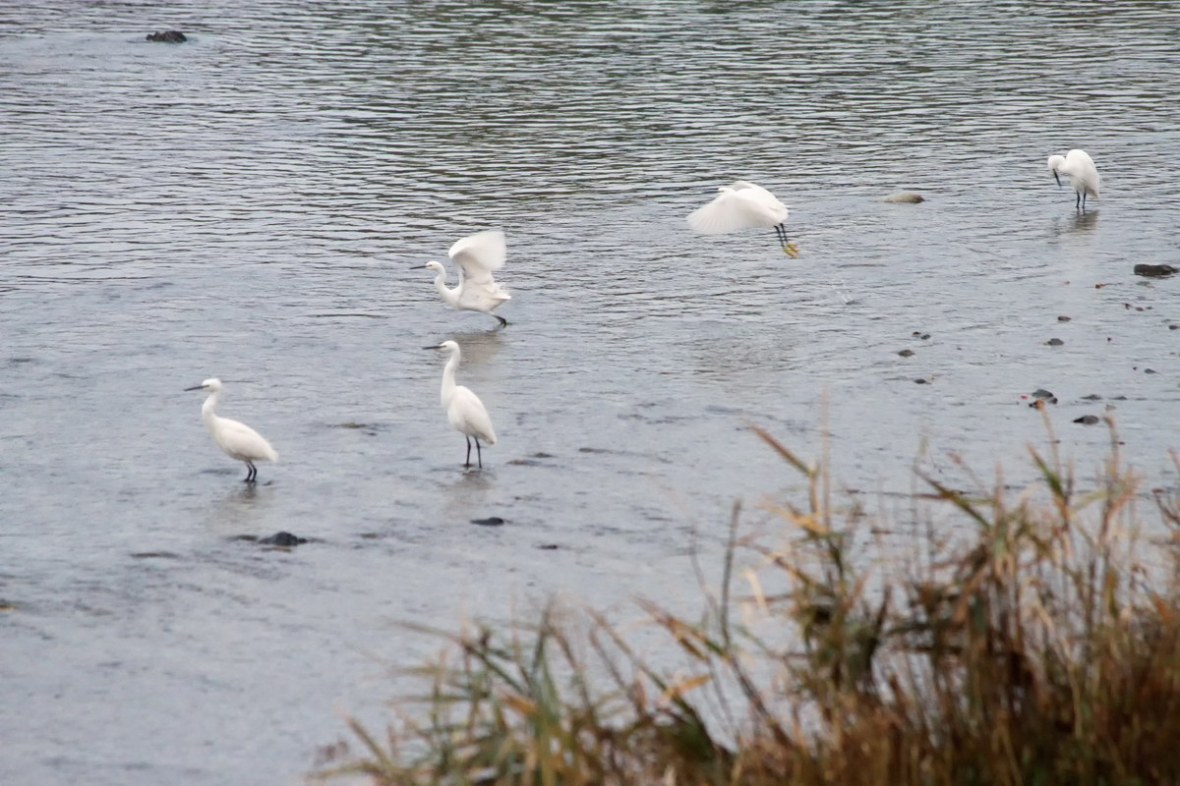 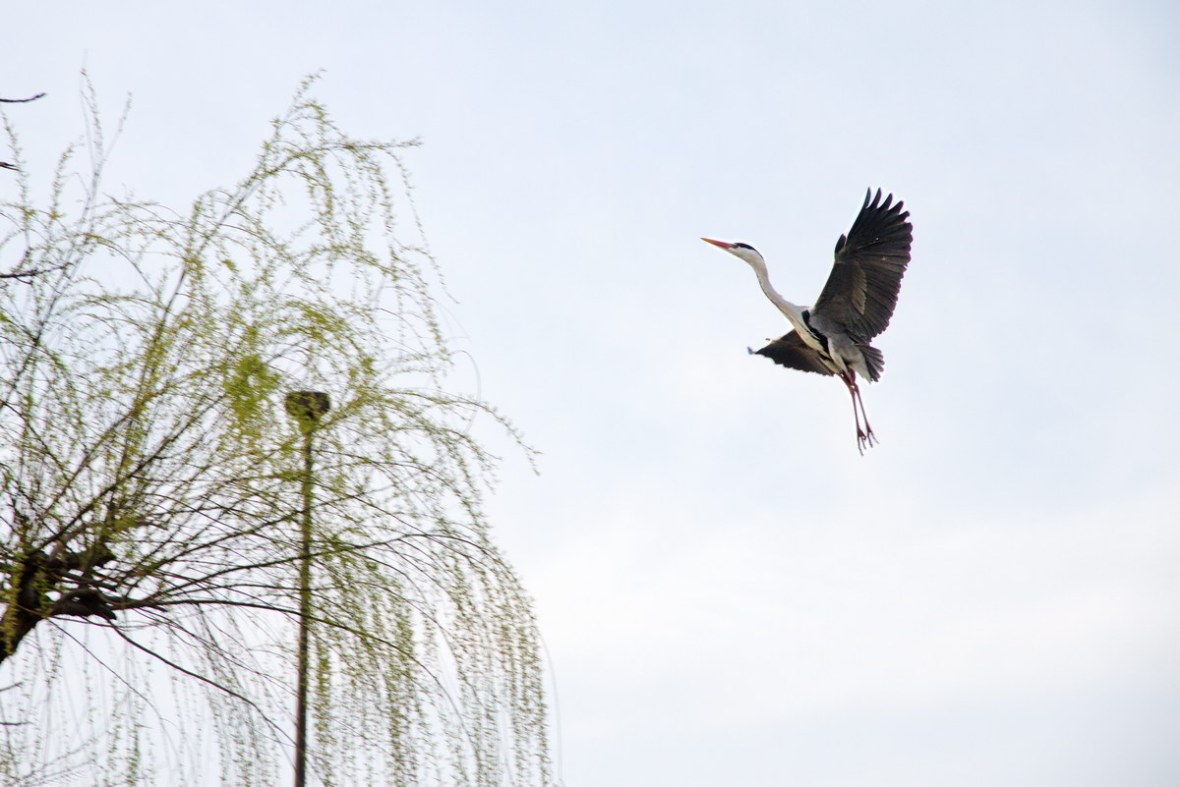 Grey herons are a frequent sight in many city spots including in the Kamogawa. 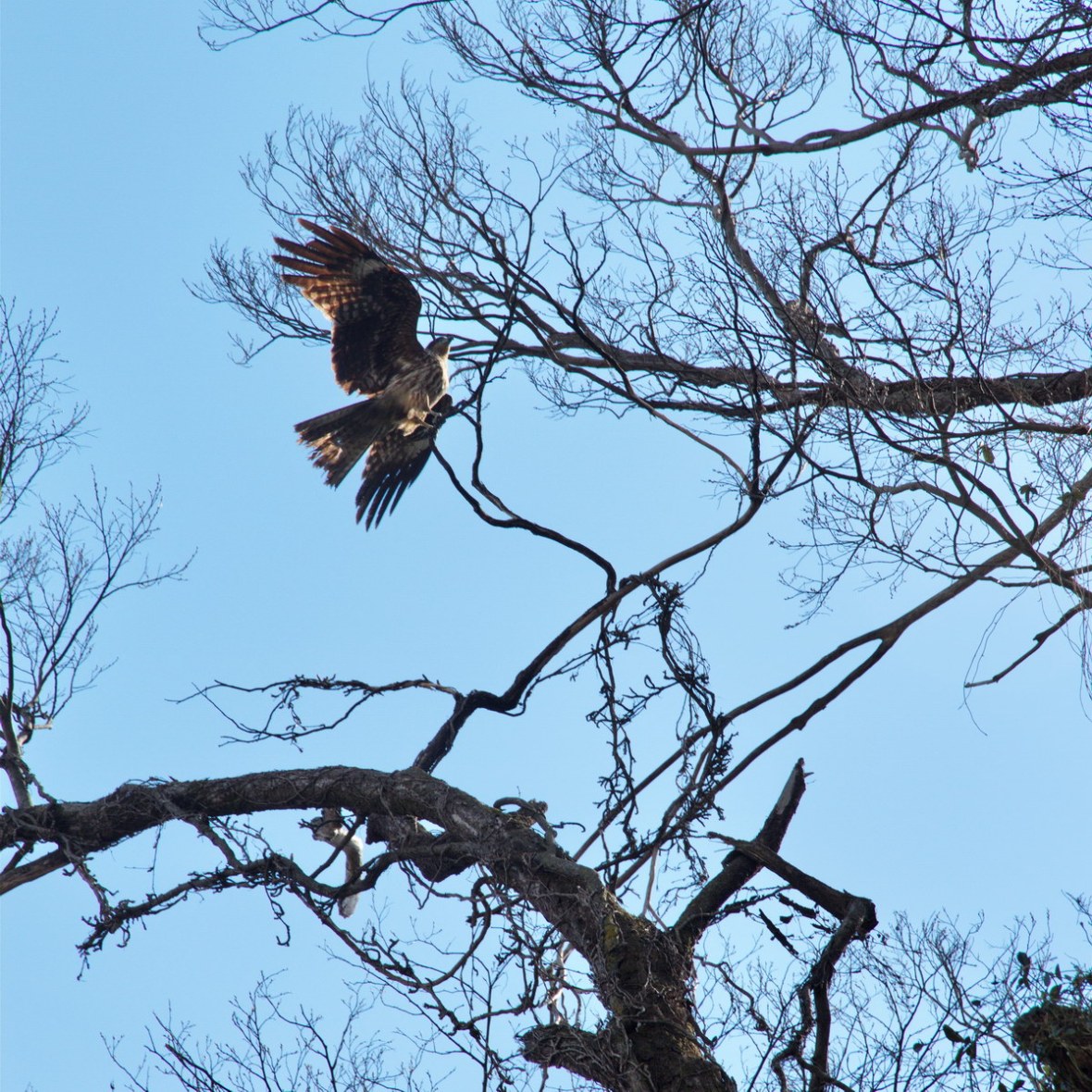 One of the numerous kites circling the skies above the river that day. 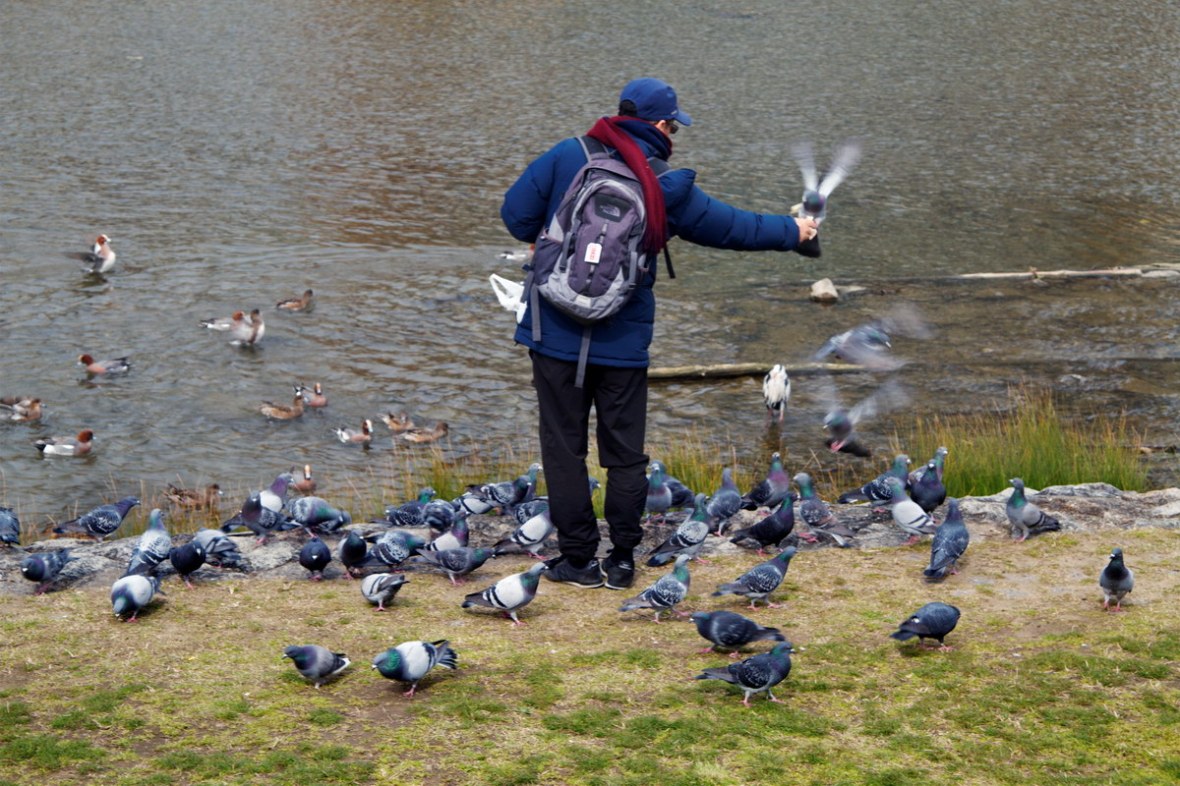 It’s a Park and a Playground
Kyotoites and visitors alike come here to unwind and do a myriad activities: there’s the middle school contingent practicing for competition; there’s a group of seniors exercising and being kids again; there are the smartly-dressed office workers resting in the benches before going home; there are the family spending family time up and down the river; there are the tourists feeding birds; there are the dog walkers, the overnight campers, the skateboarders, the tai-chi practioners, the picknickers; not to forget, the loners and the lovers, too. 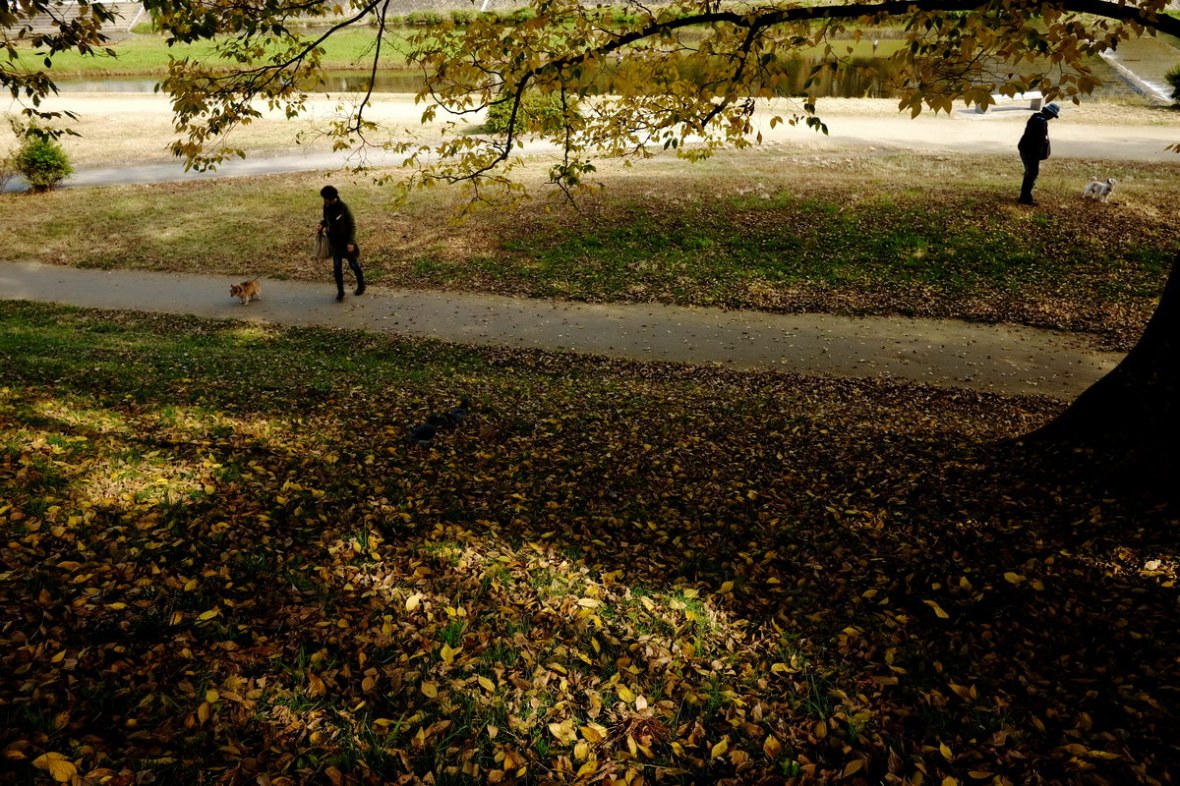 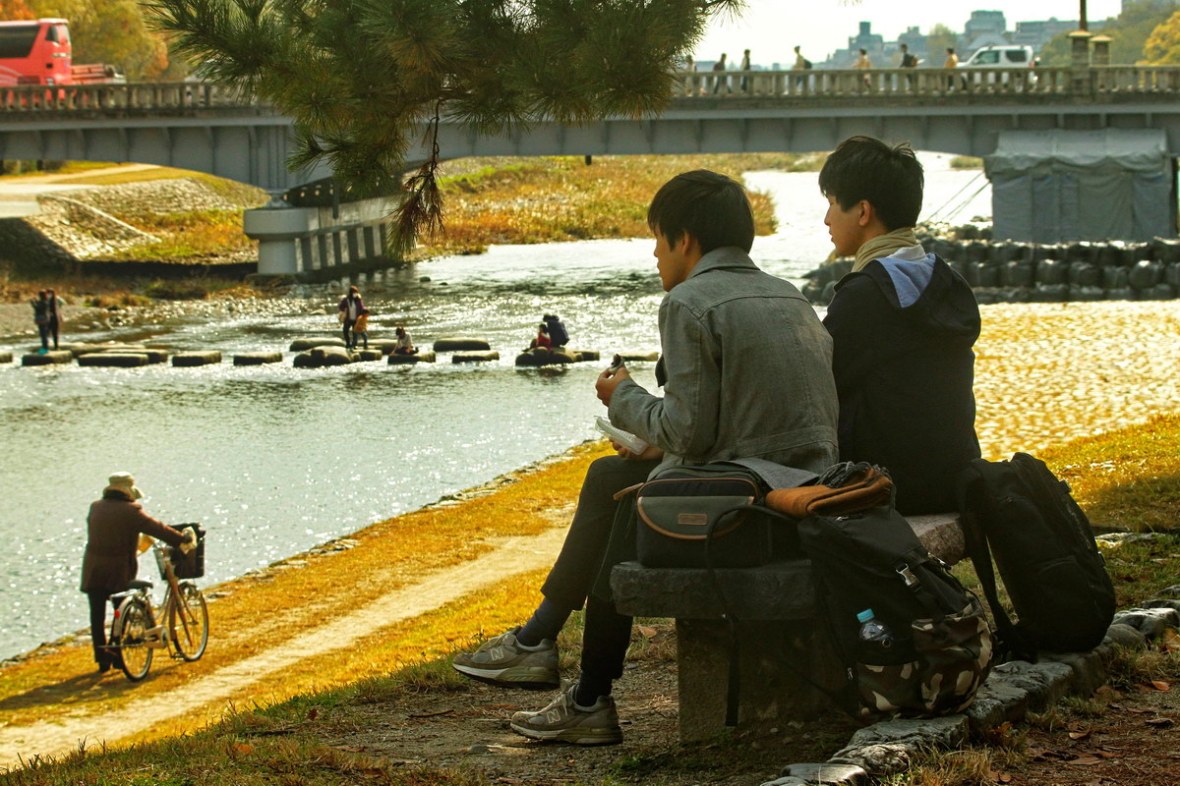 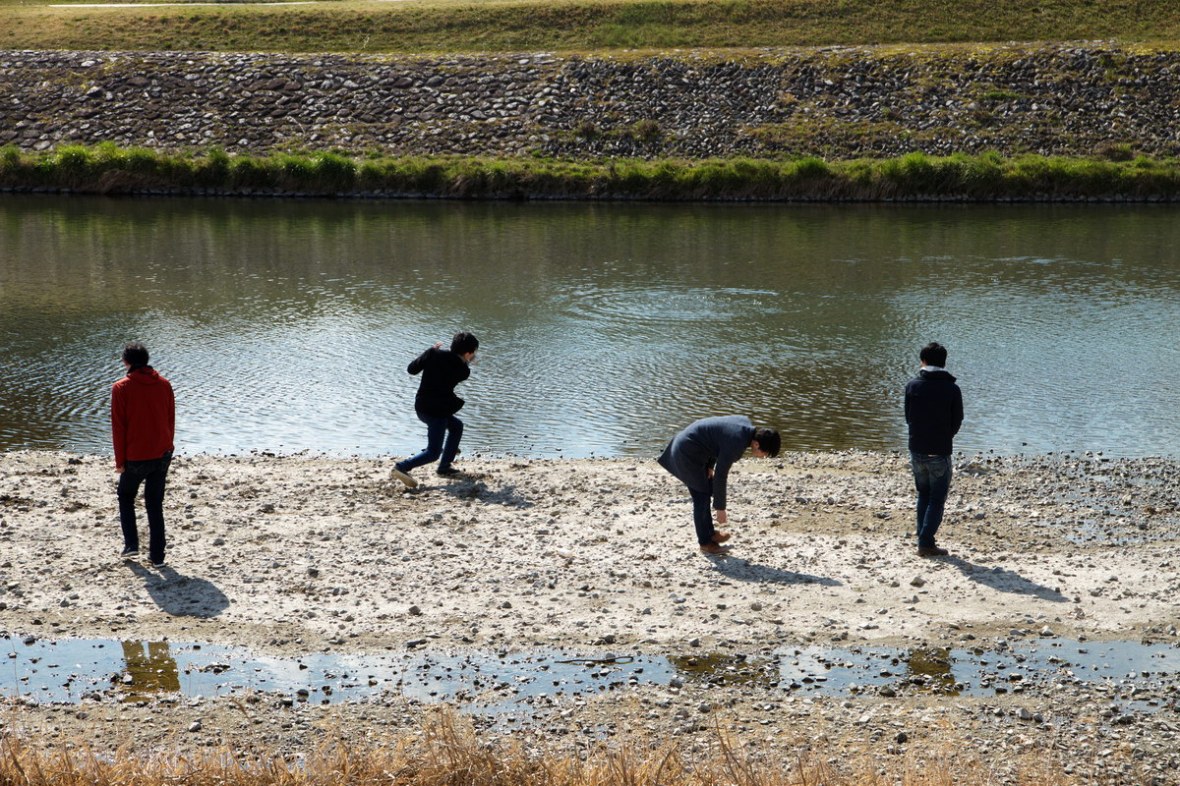 An afternoon of skipping stones. 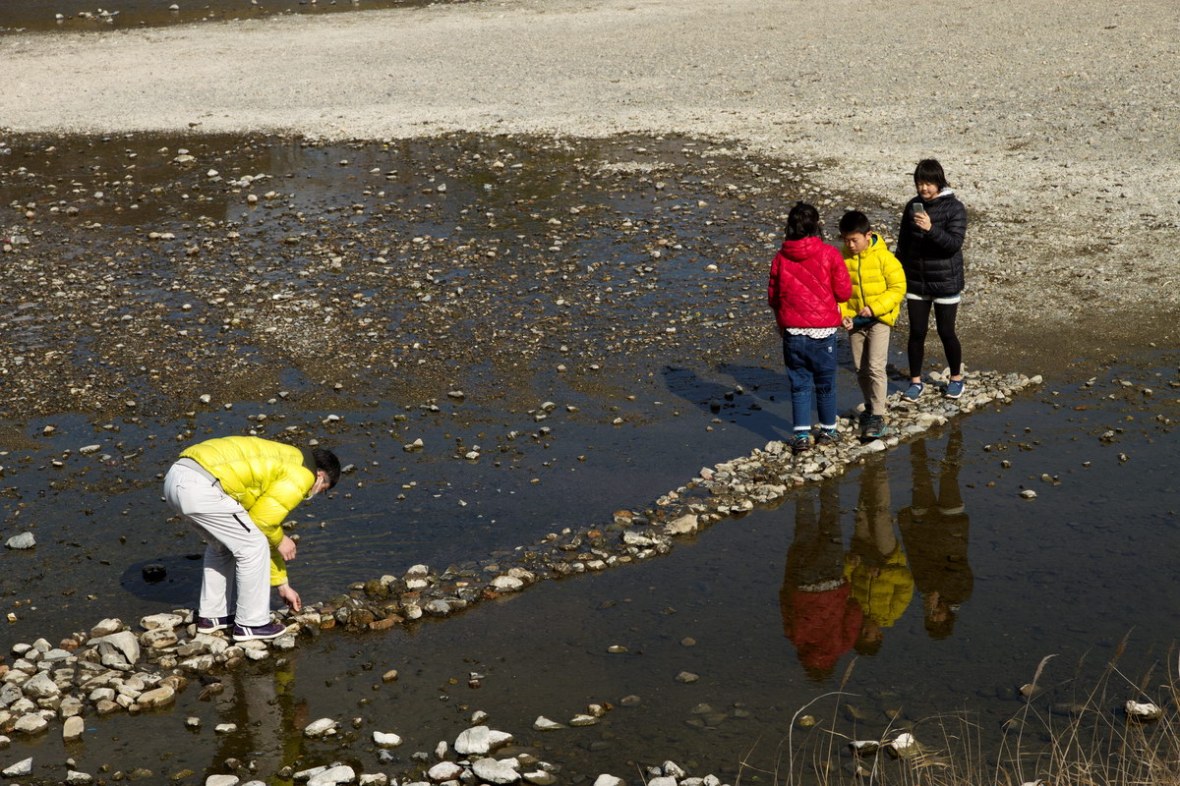 A family enjoys building a tiny bridge one stone at a time. 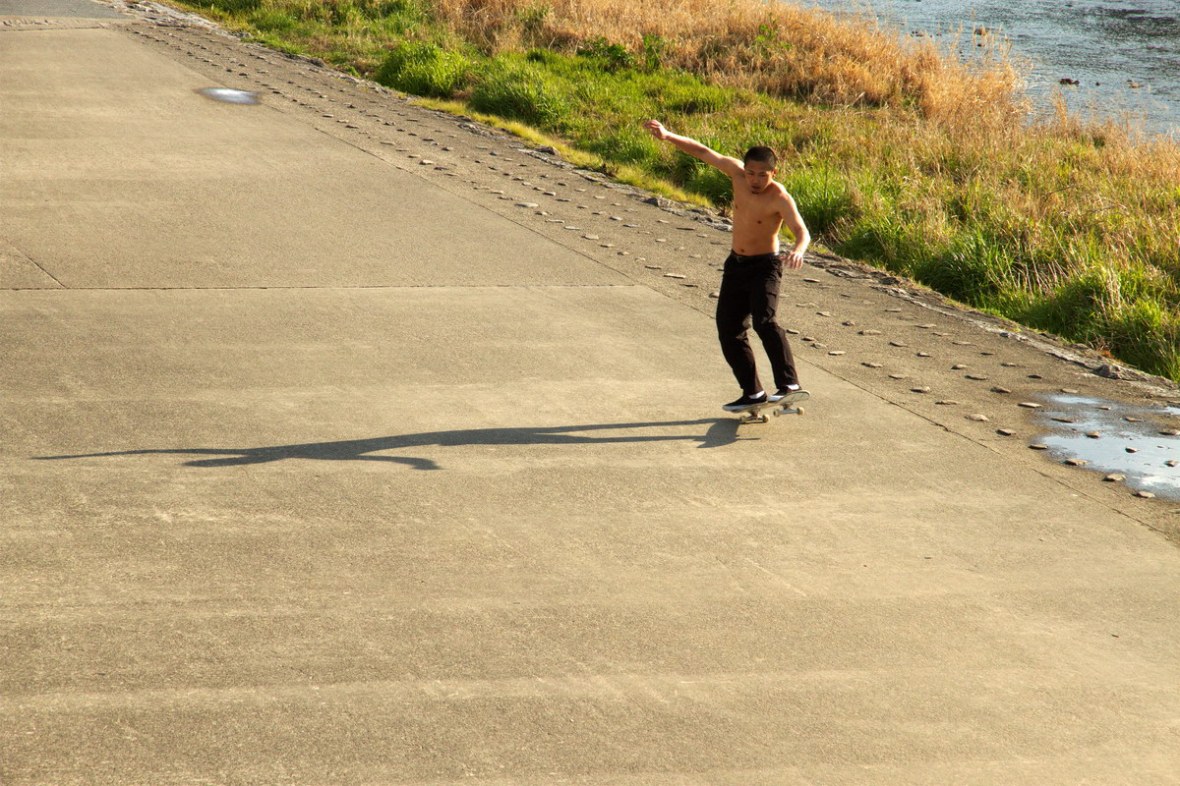 The cold air kept reminding me that it was still very much springtime despite the presence of a shirtless skateboarder. 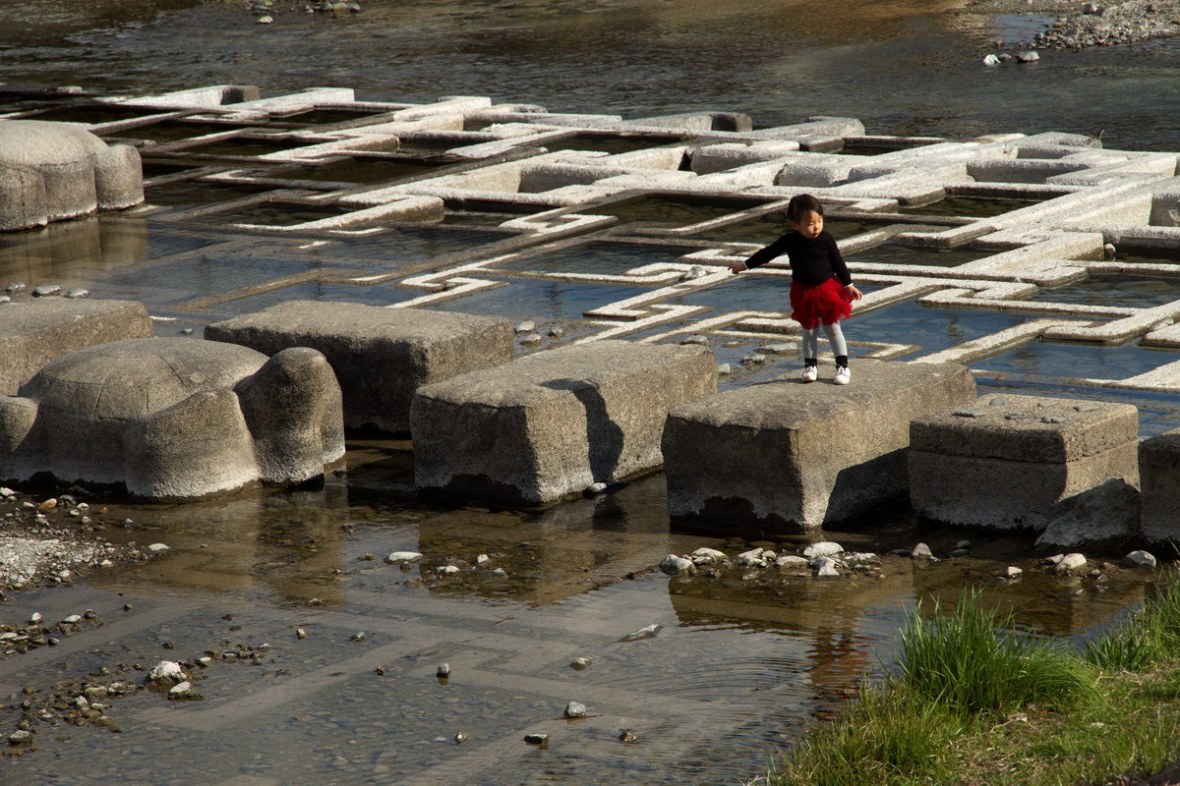 A relatively recent addition to the river, the giant concrete turtle stepping stones adds a quirky character to the Kamogawa. 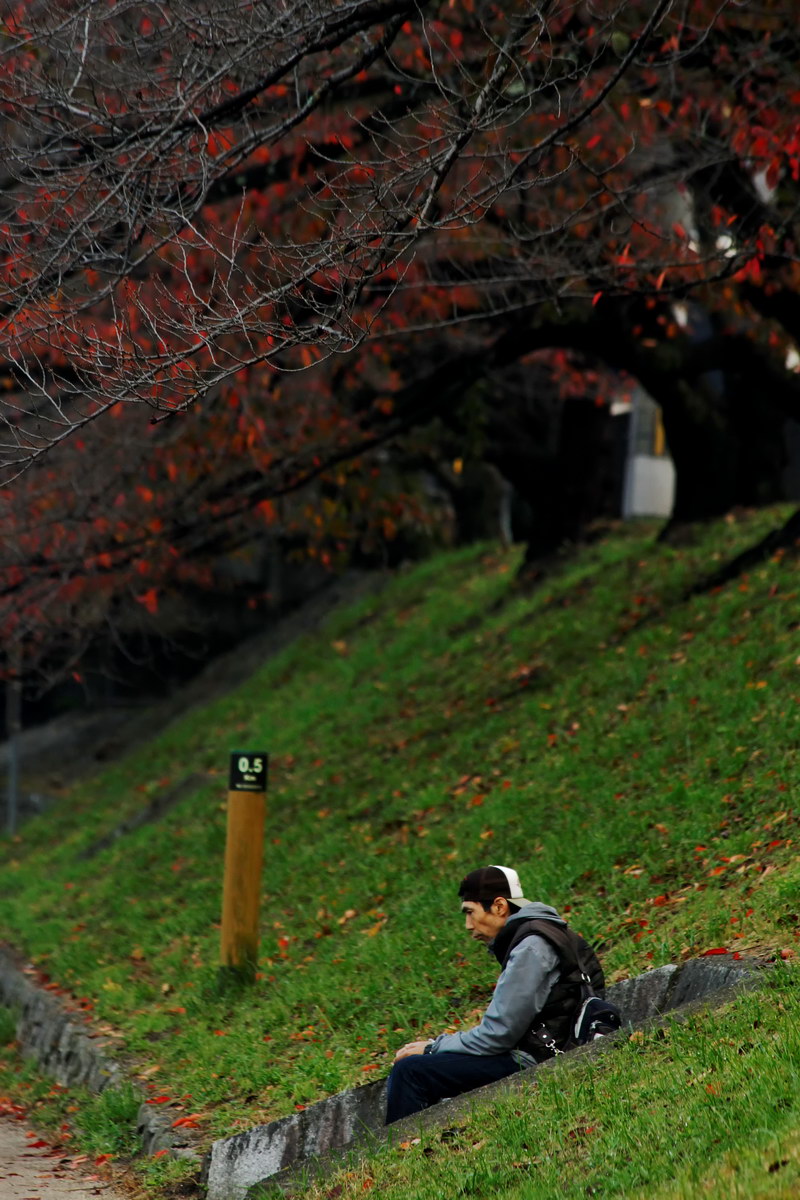 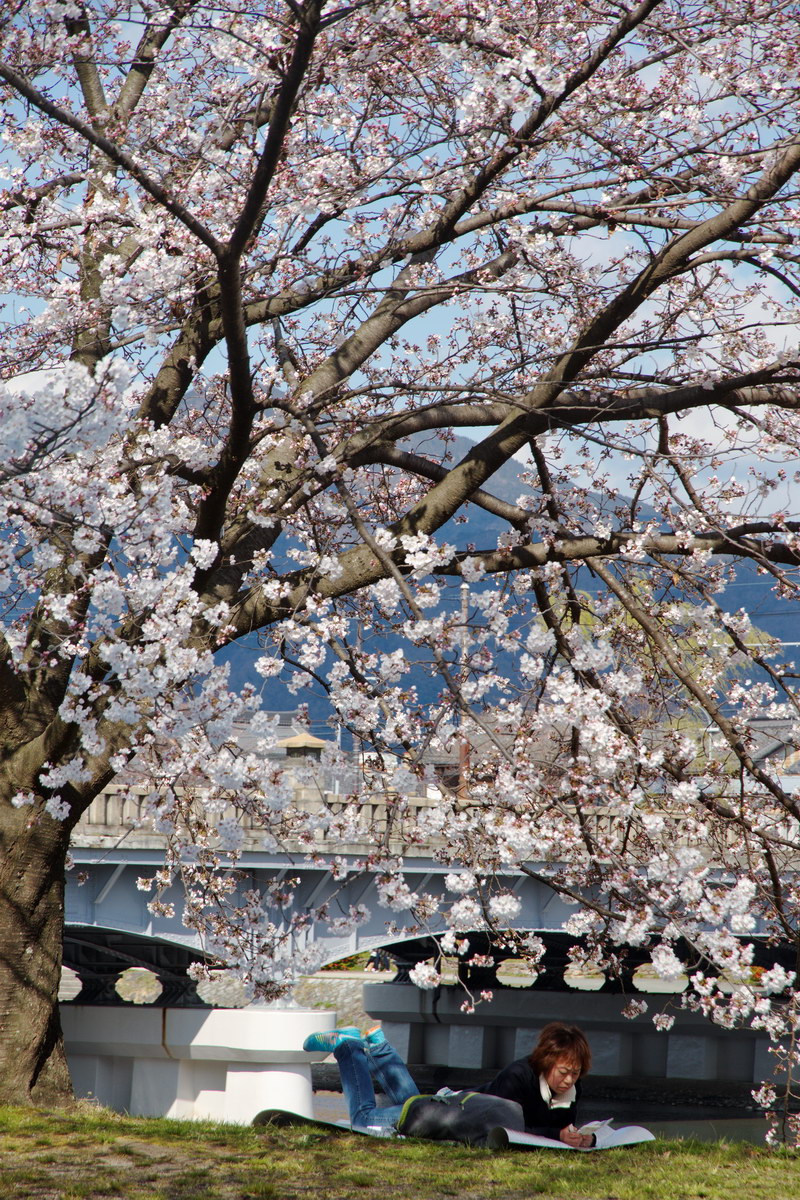 It’s a stroller’s, jogger’s, and biker’s delight
You don’t have to go very far to escape the suffocating crunch of shoulder-season crowds. But in the Kamogawa, when an area becomes crowded, it doesn’t feel that way; nor does it invite thoughts of fleeing to another place. It just makes you feel like sitting back and enjoy people-watching or bird-watching.

On other occasions, the wide riverbanks and bracing wind invite strolling, going on meditative walks, or biking. Dariel and I have been wanting to bike here but haven’t done any cycling in years so we haven’t had the nerve to revive our biking legs even in bicycle-loving Kyoto. For now, I just take vicarious delight in watching bikers, young and old, do their thing. 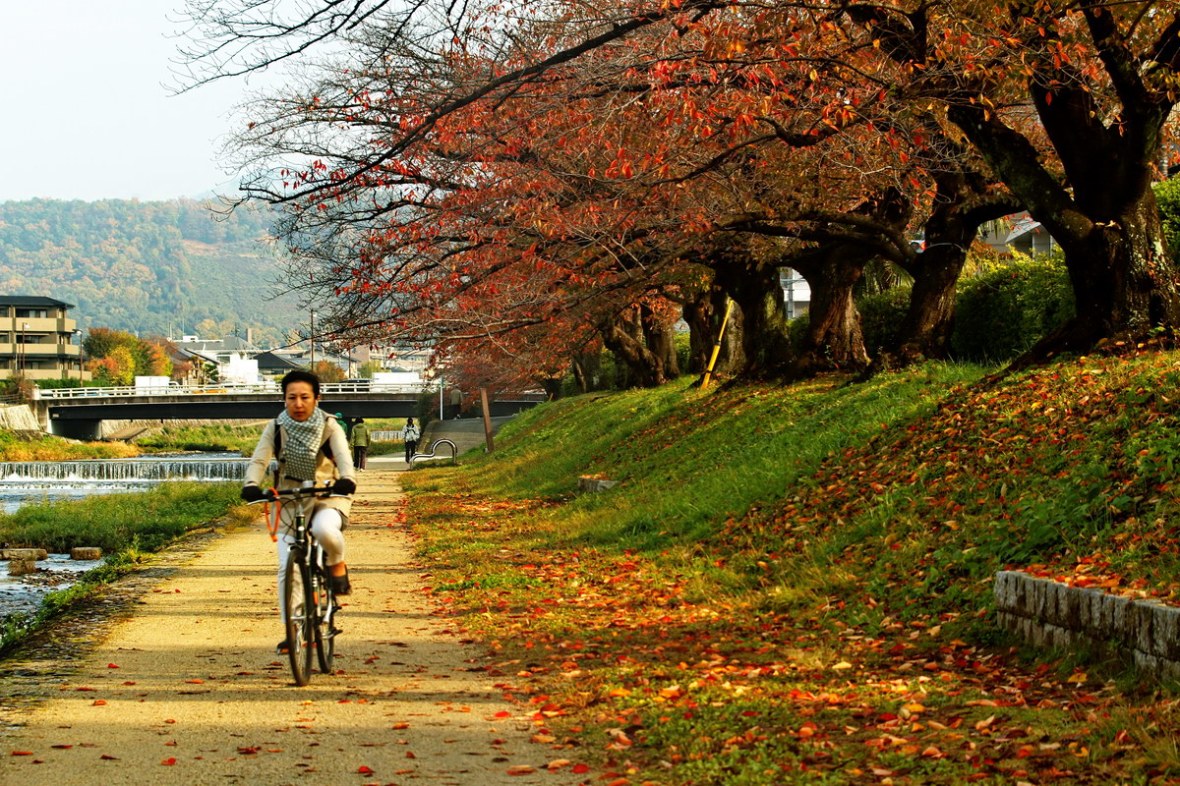 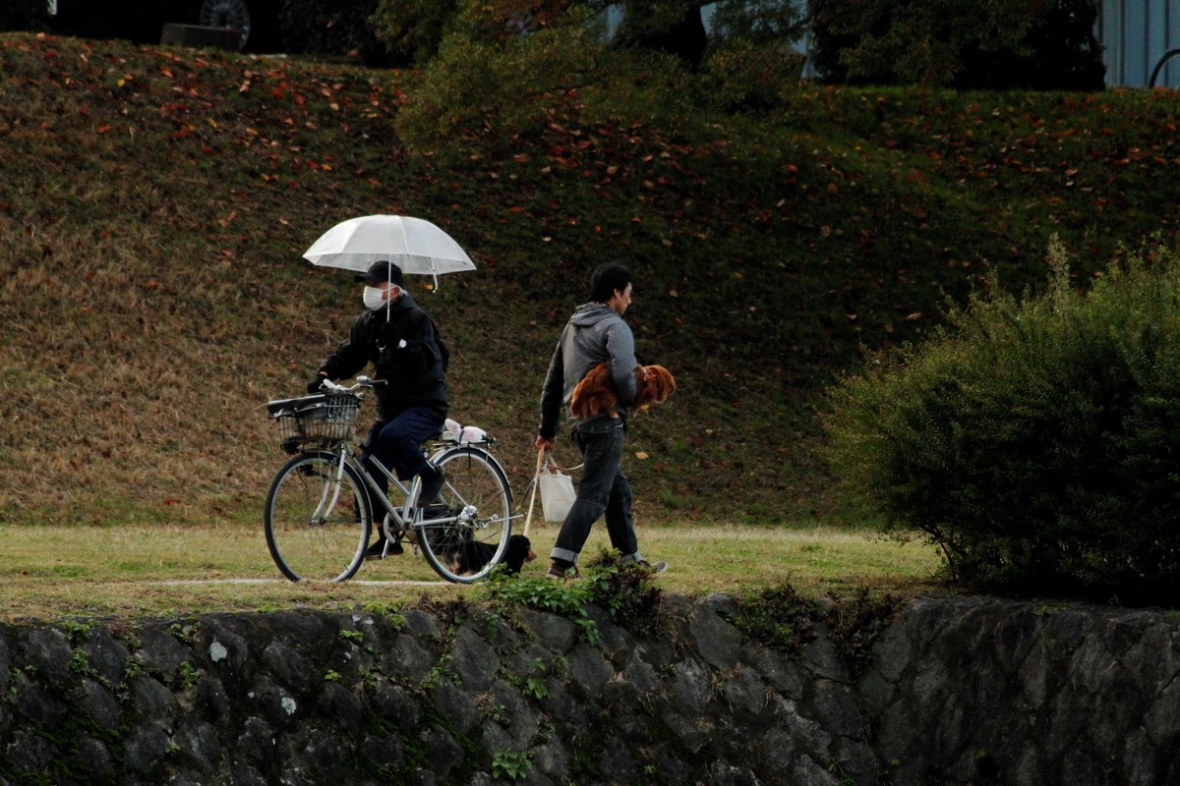 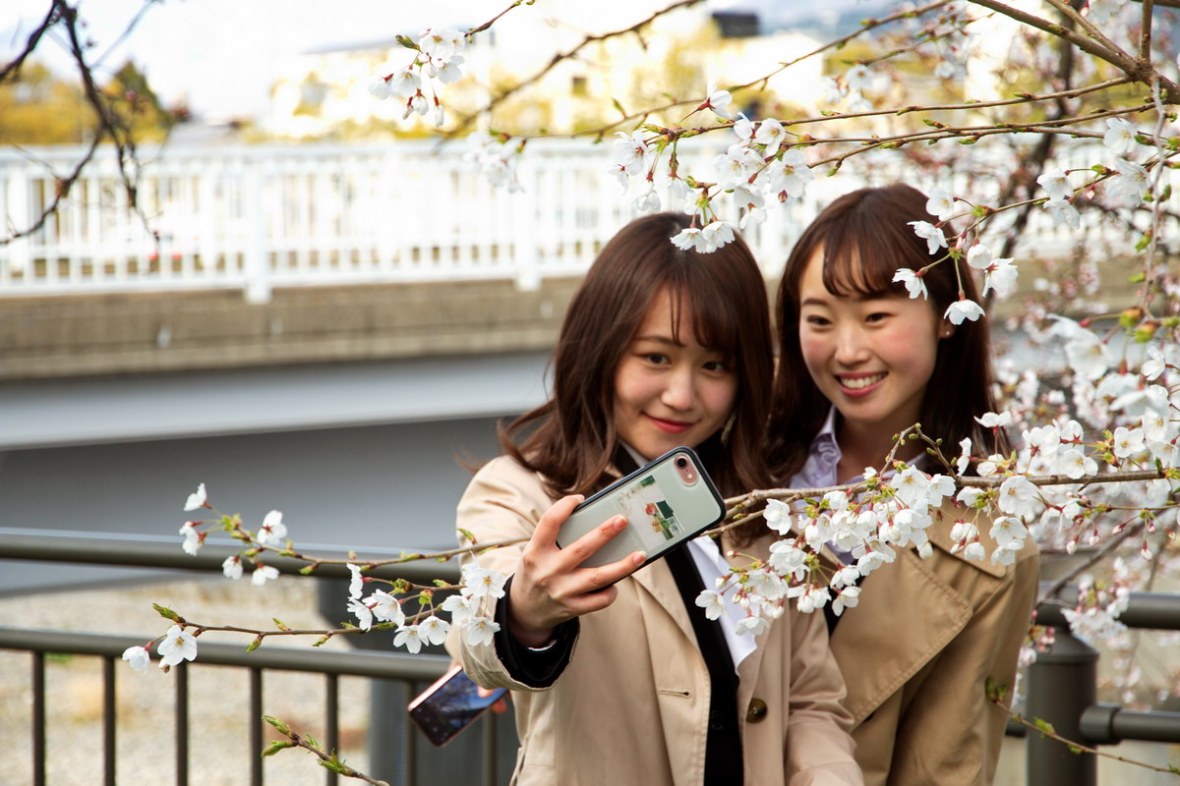 It’s a creative space
Unsurprisingly, the calming and revitalizing spirit of the river attracts the artists, the musicians, the dancers. It has even sparked the creativity of a chiropractor-turned-rock sculptor. Daisuke Ikenishi turned his talent for rock-balancing into “physics-defying rock sculptures” and his artistry is getting wide attention from fans and media alike. Unfortunately, I didn’t have time to visit the Kamogawa Delta and look for this remarkable artist–all the more reason to want to go back! 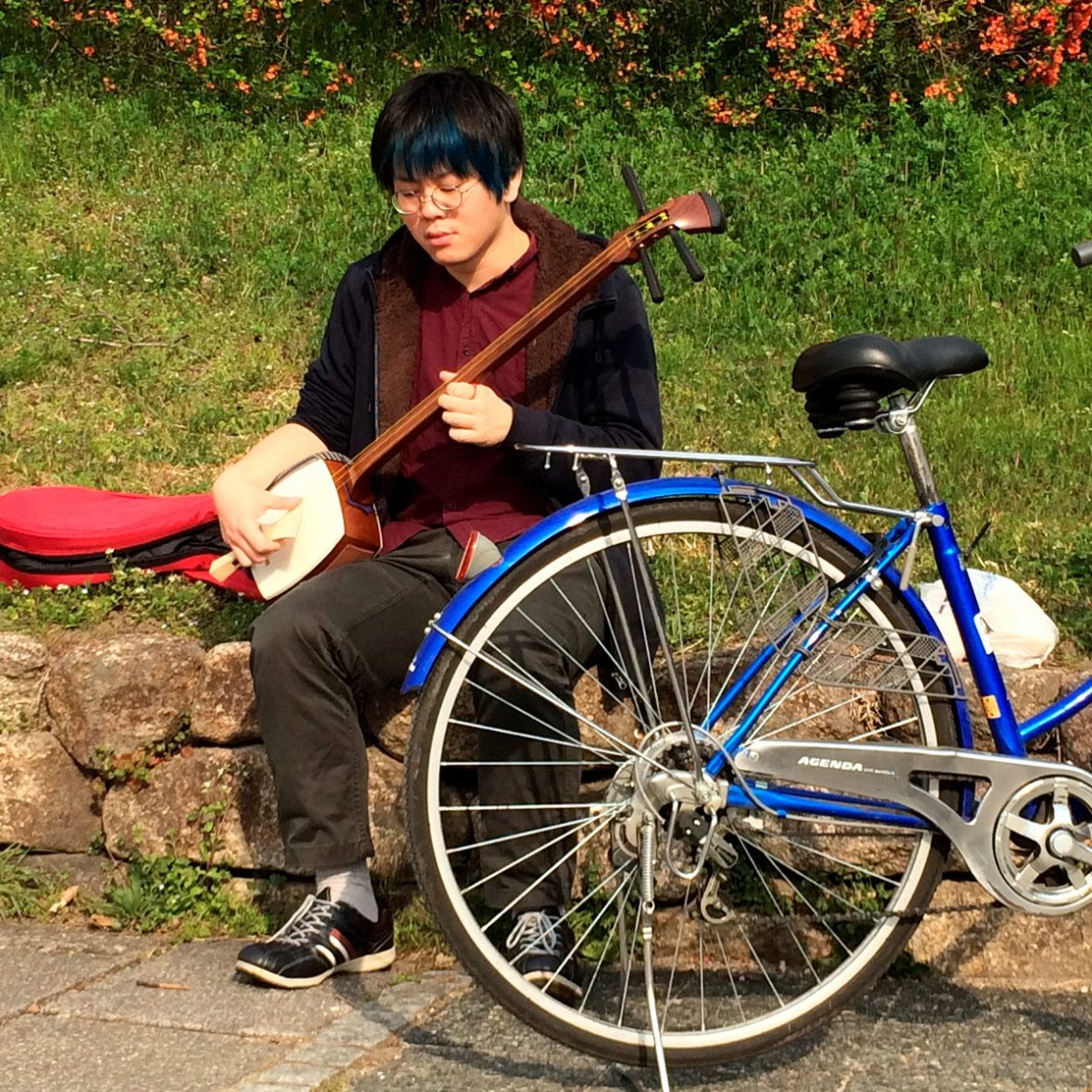 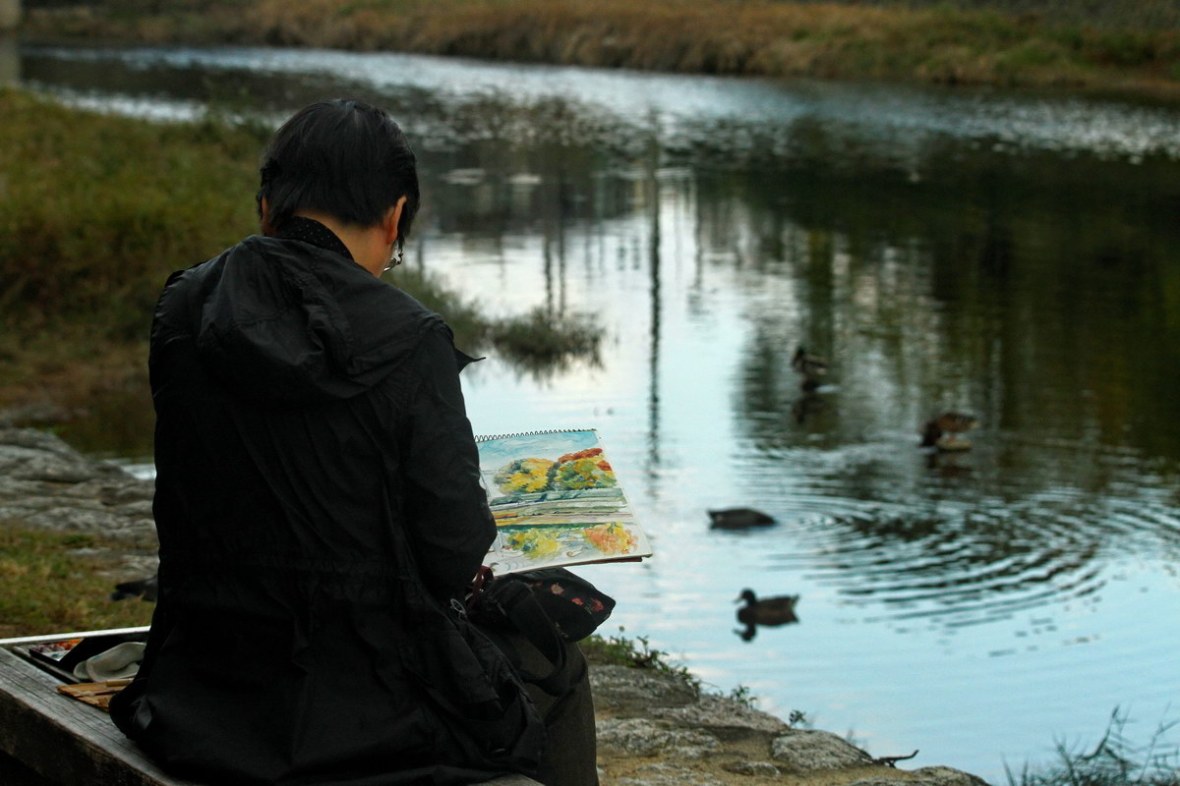 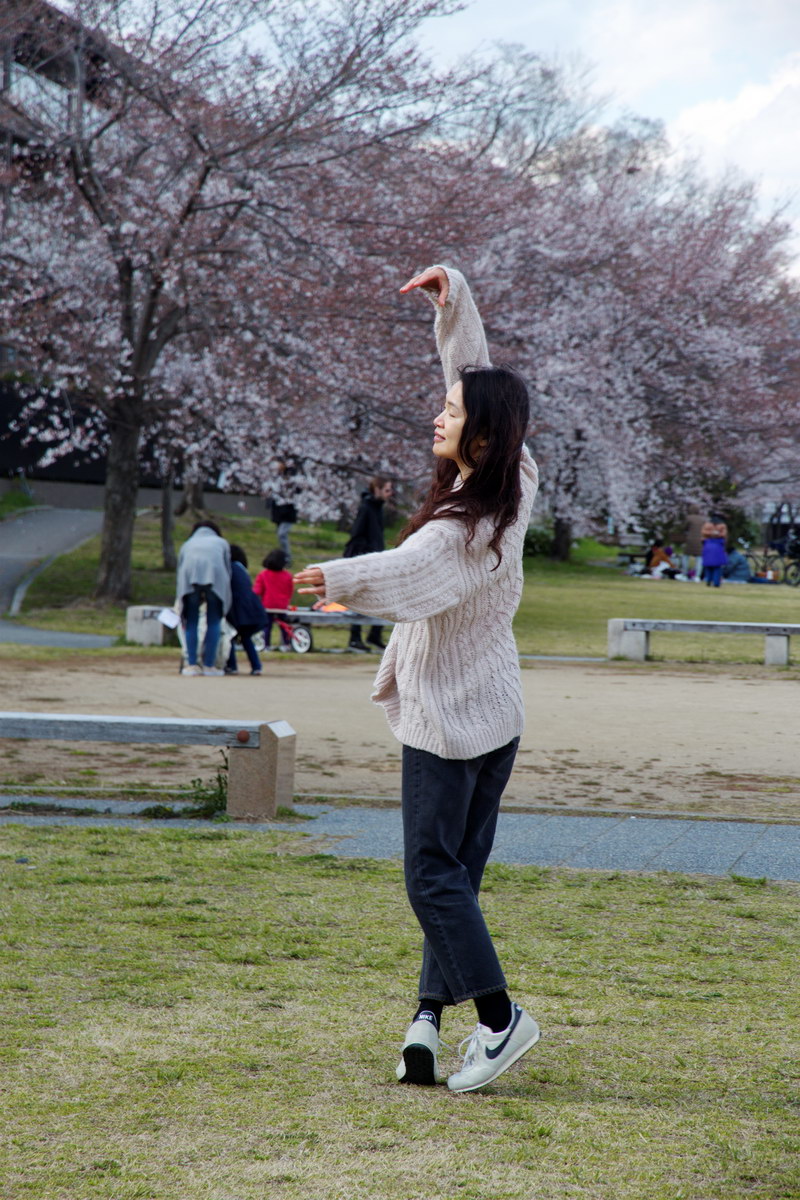 It’s one of the top spots during cherry blossom season
Google top spots for hanami in Kyoto and invariably, the Kamogawa would be included in the lists. However, I have to admit that my first sights of it this spring was rather underwhelming. I thought I’d find a long unbroken line of cherry trees abloom, but it wasn’t so. Was it perhaps due to the freak blooming of sakura that occurred all over Japan last October? They said it wouldn’t significantly affect the spring turnout this year (even though the early bloomers last October would not bloom again till next year), but I wonder if it did affect it anyway. 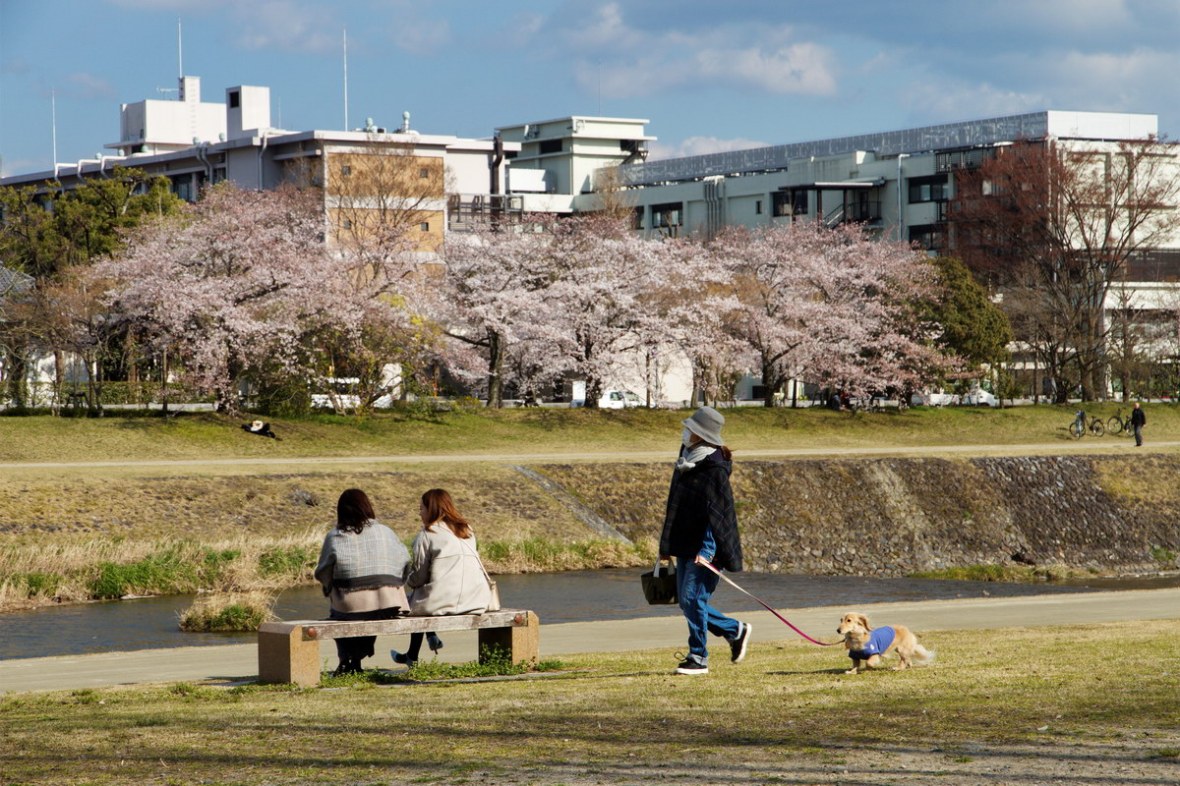 That said, what was there was still lovely. My favorite time was when I caught it between transitions—always a favorite time with photographers—and the revered whitish pink flowers were bathed in beautiful soft golden light against the dark rainstorm clouds in the background. The cherished and fleeting scenery made the ephemeral beauty of the sakura all the more indelibly memorable. 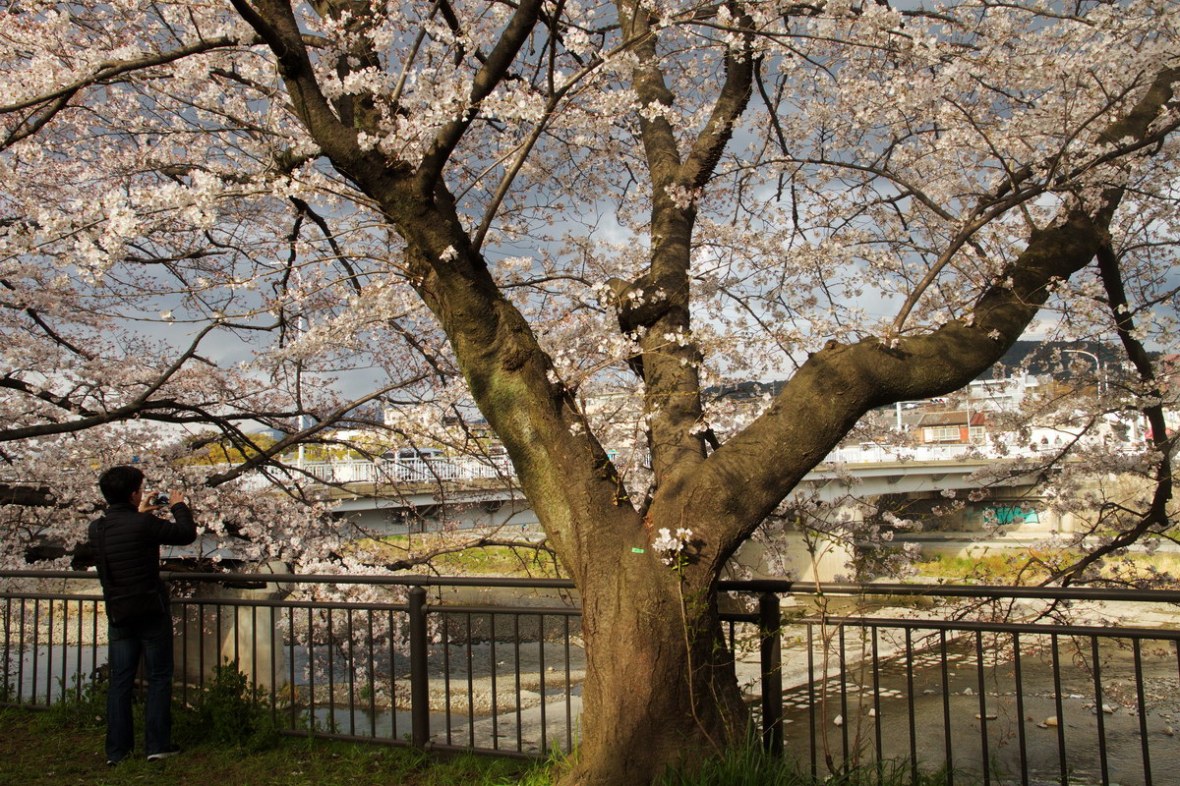 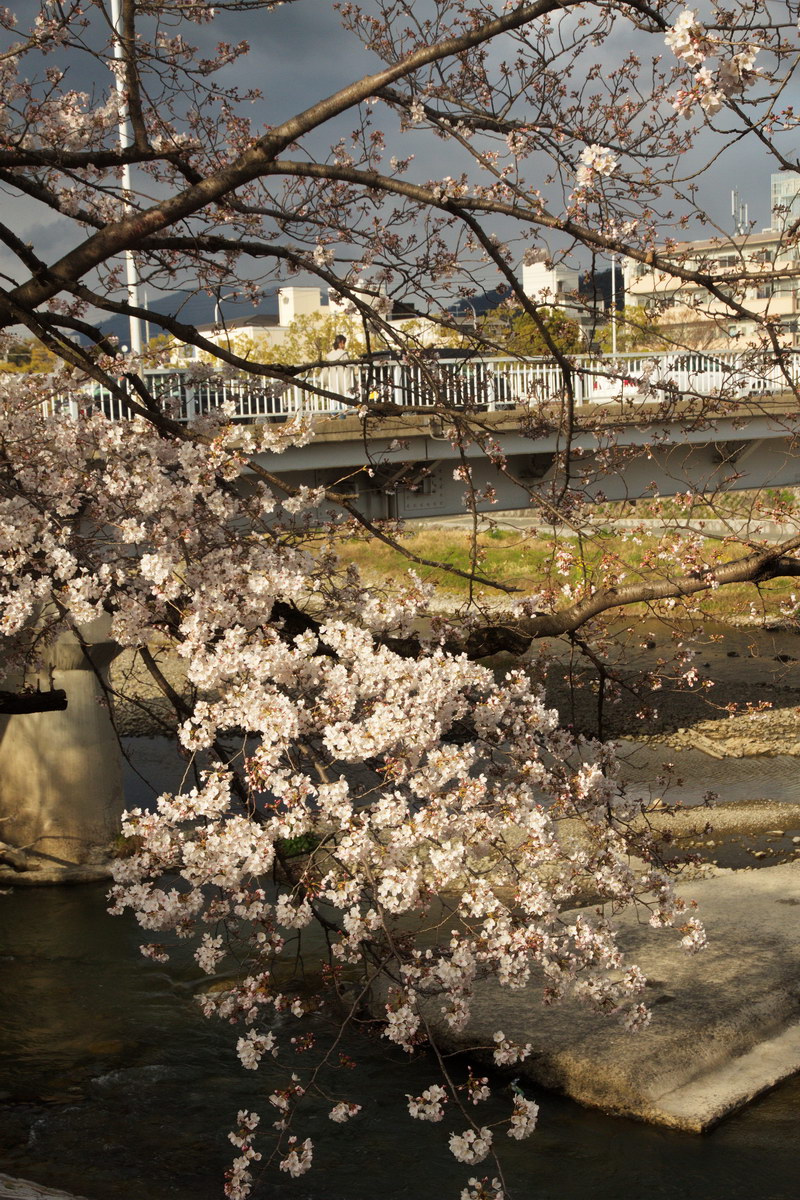 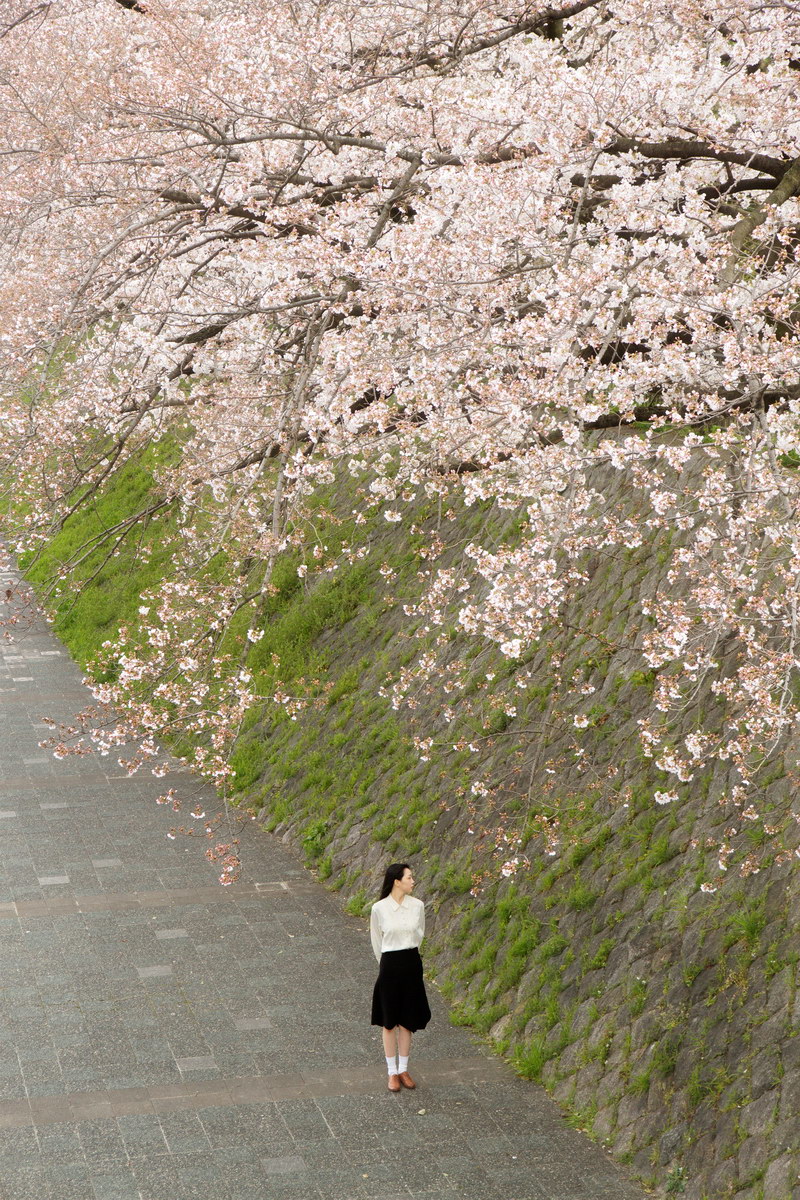 I chanced upon this very intriguing photo shoot one afternoon. 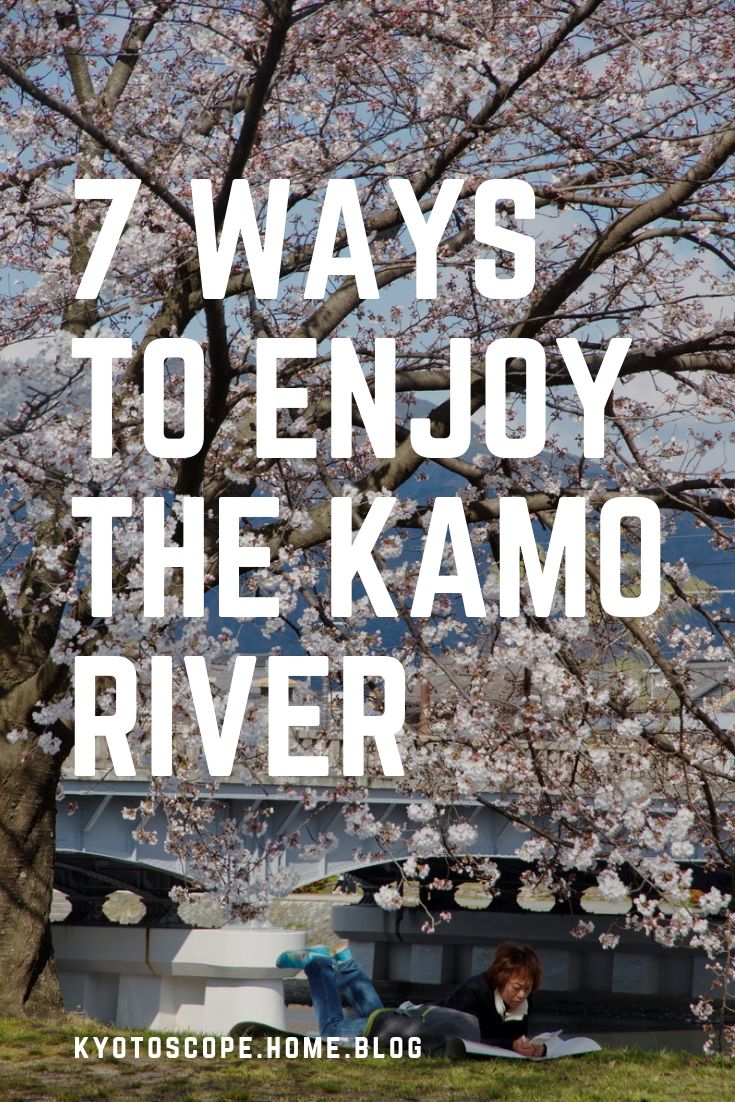